Revised Environmental Handling Fees (EHF) for paint, flammable liquids, and pesticides products (“BC PaintPlus”) in British Columbia come into effect on November 1, 2015. The current fee rates for these products continue to apply to sales made up to and including October 31, 2015. The fee rates are set by PCA’s board of directors, which includes leading industry representatives, and not by government. 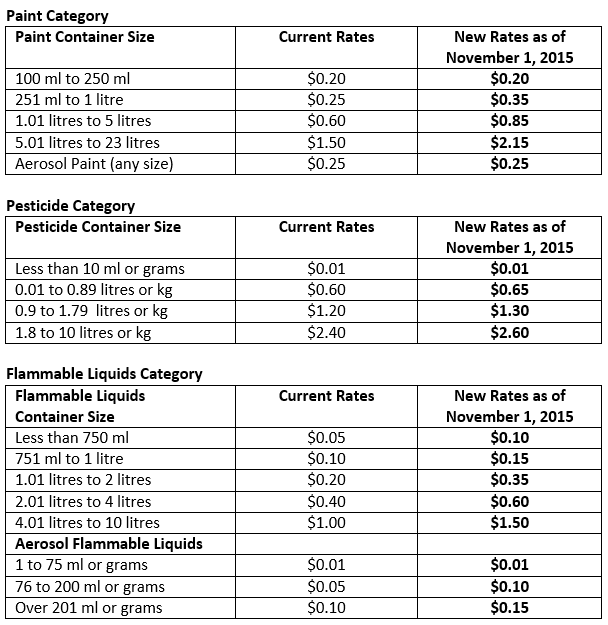 Established in 1994 by Product Care Association, British Columbia’s PaintRecycle program is the oldest in Canada. The program expanded in 1997 to include HHW (flammable liquids, pesticides and gasoline) and the group of products, is called “BC PaintPlus”.

The PaintRecycle program achieves the highest leftover paint recovery rates in North America (> 10%) and possibly the world. The quantity of flammable liquid collected has increased 160% over the past 12 years, and more than 200% for pesticides.  While these recovery rates are testimony to the success of the program, the collection volumes are also the program’s biggest cost driver despite efficiencies achieved by PCA in directly operating the processing, and finding better and less costly recycling options.

Due to economic reasons, industry sales have not increased at the same rates, which means that program costs have outpaced revenues. Fortunately the BC PaintPlus program’s accumulated surplus has allowed the current fee rates to be maintained despite annual losses for the past several years, however this is not sustainable and it is necessary to increase fee rates at this time. Note that the new fee rates for BC Paint are the same as the current rates for Ontario paint.

A fee rate adjustment for the petroleum sector (gasoline), the remaining product in the BC Paint Plus group, is currently under review. Advance notification will be provided to the members of that sector if a change is made.

Thank you for your support of PCA’s BC PaintPlus program.